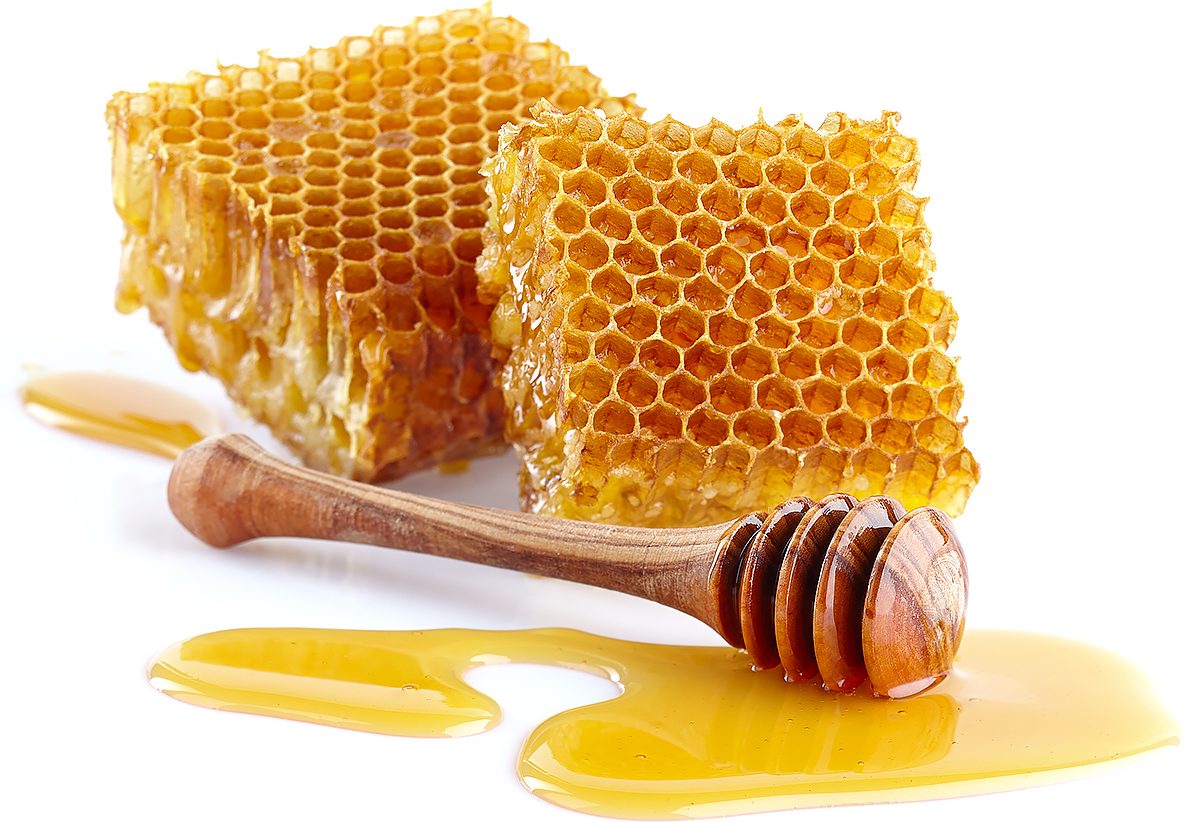 Honey is a natural delicacy that bees create from the nectar that they collect from flowers. The flowers’ nectar consists of approximately 55% water, 40% sugar and 5% proteins and minerals. The forager bees collect nectar from flowers by sucking it into their honey stomach. Then, they take it to their hive. While flying back to the hive, the bee is already secreting and mixing different enzymes into the nectar in its honey stomach, which is the first step of making nectar into honey. The bees in the hive continue mixing the nectar by regurgitating it from their honey stomach to their proboscis. At the same time, the bees evaporate moisture in the nectar. This process takes approximately 20 minutes. After this, the honey that is made from the nectar is stored in the beehive’s cells where moisture continues to evaporate.

Honey in Tubs – Using a churning method, some of the honey is made into very fine-crystal, soft and easily-spreadable creamed honey, which is mixed with liquid honey in the packing containers. This creamed honey has exactly the right thickness to be put in tubs. Once the honey has been packed into tubs, the tubs are taken to cold storage to crystallize. From this cold storage, the honey is delivered to the wholesale warehouses and from there to retailers to sell to consumers.

Watch the video to see how honey gets from the producer to store shelves (video in Finnish).

What does honey consist of?

After the correct moisture level has been reached and the honey is done, the bees cover the cells with a thin layer of wax. The layer of wax protects the honey. The enzymes and evaporated moisture turn the nectar into honey. The resulting honey consists of approximately 20% water and 80 % sugars. Other components in honey include different vitamins, minerals and micronutrients.

People occasionally run into different types of fake honey around the world. In some cases, the honey has been processed or diluted with other raw ingredients to the point where the product can no longer officially be called honey. Honey Group Finland is the only honey packaging company in Finland to have a quality assurance certificate which guarantees that consumers always get pure, high-quality honey. Learn more about the certificate! (In Finnish)

Where does Honey Group Finland’s honey come from?

The honey that we package comes from domestic contract producers around Finland. Their professional beekeeping and high-quality Finnish honey allow us to use the “Hyvää Suomesta” (Produced in Finland) label. The label guarantees that our honey is Finnish. Honey Group Finland’s production process is also the only certified production process in the industry. The ISO 22000 standard (video in Finnish) ensures that consumers always get a high-quality, pure and natural product.

While flying from flower to flower with balls of pollen on their legs, bees also pollinate plants. This allows new plants to grow, leading to better yield and higher quality. Fruit trees and berry bushes, in particular, benefit from pollination.

Bees are taken care of all year

The honey is scraped off the frames with a honey uncapper or roller and the frames are placed into a honey extractor. The extractor forces the honey out of the cells. From the extractor, the honey flows into a filtering pool where strainers catch any bits of wax and other trash, and the pure honey flows into containers. The clean honey can be enjoyed as is, but retail honey is made soft and fluid. If this part of the process is left undone, the honey will crystallise on its own and become very hard.

The honey that is eaten directly from the cell maintains its aroma more strongly than harvested honey. The wax that comes off the cells can either be spat out or swallowed, wax acts like fibre in the body. Some beekeepers and natural product retailers sell cell honey.

Still looking for something? Check the FAQ!