The honey bee is the only insect that humans have been able to domesticate. Bees live in colonies, in which there can be up to more than 60 000 bees in the summer. These colonies consist of one reproducing queen, the non-reproducing females, i.e. the workers, and the male bees, i.e. the drones. The queen bee is the only fertile female and it does not normally tolerate other queens in the hive. The queen secretes a particular aroma, a pheromone, the sufficient amount of which tells the other bees that the queen is well, and life in the hive continues as normal. If the quantity of this pheromone decreases due to the queen’s illness, ageing or death, the bees become restless and begin to grow a new queen. Since only the queen can reproduce, her existence and well-being is absolutely essential to the colony and, in fact, laying eggs is the only duty that is left to the queen.

The queen only flies during her virgin mating flight and during swarming. The fertilized queen returns to the hive and does not leave the hive unless to swarm if the hive gets divided. The queen stores the sperm that she has received during mating and can use this to lay eggs for up to many years.

The drone is a male bee that is born from an unfertilized egg that the queen has laid in a specific drone cell. The drone cell is larger than a worker cell, and the drone itself is bigger than a worker. A drone’s development period is 24 days and its lifespan is 1-4 months. Its abdomen is blunt, it does not have a sting or many of the other tools that workers have. Therefore, it enjoys full board in the hive, in other words it is served by the workers, until it goes on its fateful mating flight. Drones are grown only for the summer season when there are 200-500 of them in the hive. Towards late summer, the workers drive them out to stop them from consuming the winter food supplies.

The workers begin their lives from fertilized eggs as does the queen, but worker eggs are laid in small worker cells. The development period of a worker is 21 days and their lifespan is 35-45 days. The hibernating bees, those born at the end of August, live for several months because they live in a winter cluster formation and do not exhaust themselves.

The duty of the foraging bees is to visit flowers and, consequently, to perform the pollination that is important to plants, as well as to gather nectar, pollen, propolis and water. This foraging stage lasts for 1-2 weeks, during which the bee flies approximately 800 kilometres. Each foraging trip reaches no further than three kilometres from the hive at most, and the bee makes these trips until its wings become worn out and it dies.

The year at beehive 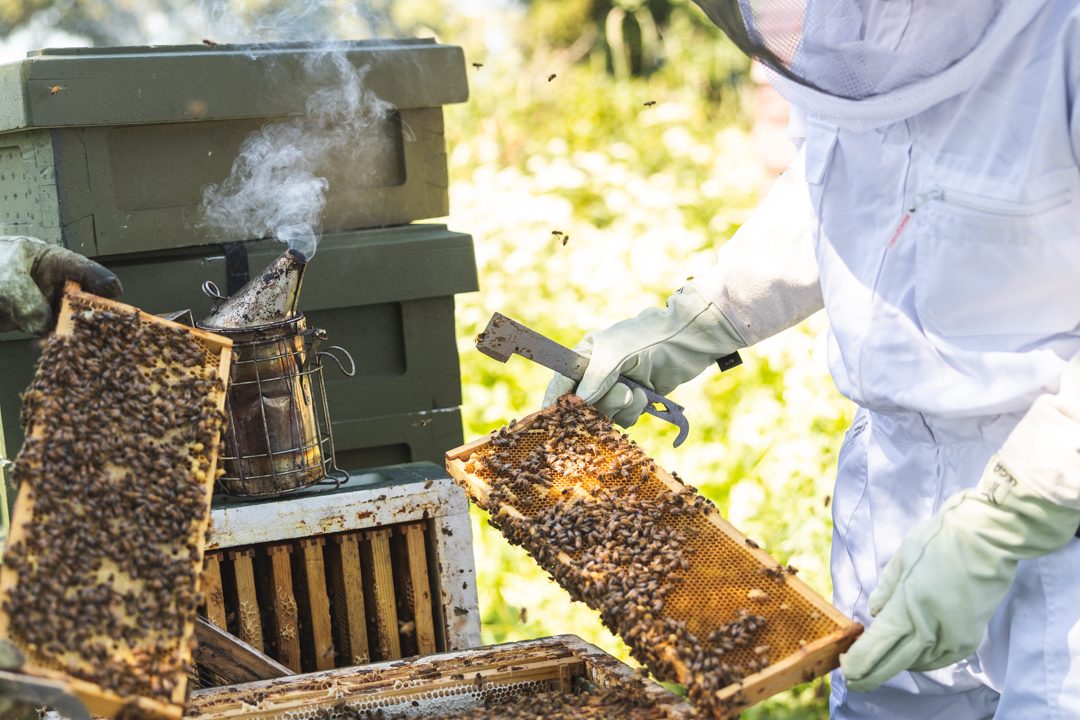 The bees live in beehives that are built by the beekeeper during both the summers as well as the winters. During the summer, the size of the colony is considerably bigger than during the winter season when the queen and approximately 20 000 workers hibernate in the hive.

From a beekeeper’s viewpoint, the bee year can be considered to begin in late summer after the harvest, once the queen’s egg laying is over for that summer, and the bees begin to prepare for their winter rest. At this point, the beekeeper’s duty is to take care of the winter feeding and to get the hive ready for the winter. The honey that has been collected is replaced with a sugar solution, which the bees then use to prepare and to store a honey-like solution for their food.

Once the feeding is completed, the bees are left in peace until even daytime temperatures have fallen under 5oC and the bees no longer fly outside. At this stage, the flight entrances are sealed against mice and other small animals, and in particular hives that are in open areas are protected from the wind and the snow. After this, the hives are not touched before the spring, but every now and then it is necessary to check whether cold winds or wild animals have caused any destruction. During the winter, the beekeeper cleans and updates the hive equipment, and makes purchases and plans for the next spring and summer.

Once the temperature in spring rises to 8-10oC, the flight entrances are opened and the bees are let out on a cleansing flight, in other words to defecate, after the break that has lasted all winter. When spring begins, the winter bees are nearing the end of their lifecycle, and normally there are more of them dying than there are new ones being born, so the population of the hive can fall up until May.

The situation of the hives is checked once a week and sufficient nourishment is ensured. Additional nourishment should always be provided for the hive during cold or very rainy weather to ensure that the development is not disturbed due to lack of food. The swarming season begins at the end of May and normally lasts until mid July. To avoid swarming, beekeepers have to keep the hives in such condition that will make the bees stay and feel comfortable in them.

Once the number of bees significantly increases in June, additional compartments must be added to the hives for the maturing and the storing of honey. The easiest way to expand is to add one compartment on top of the hive. 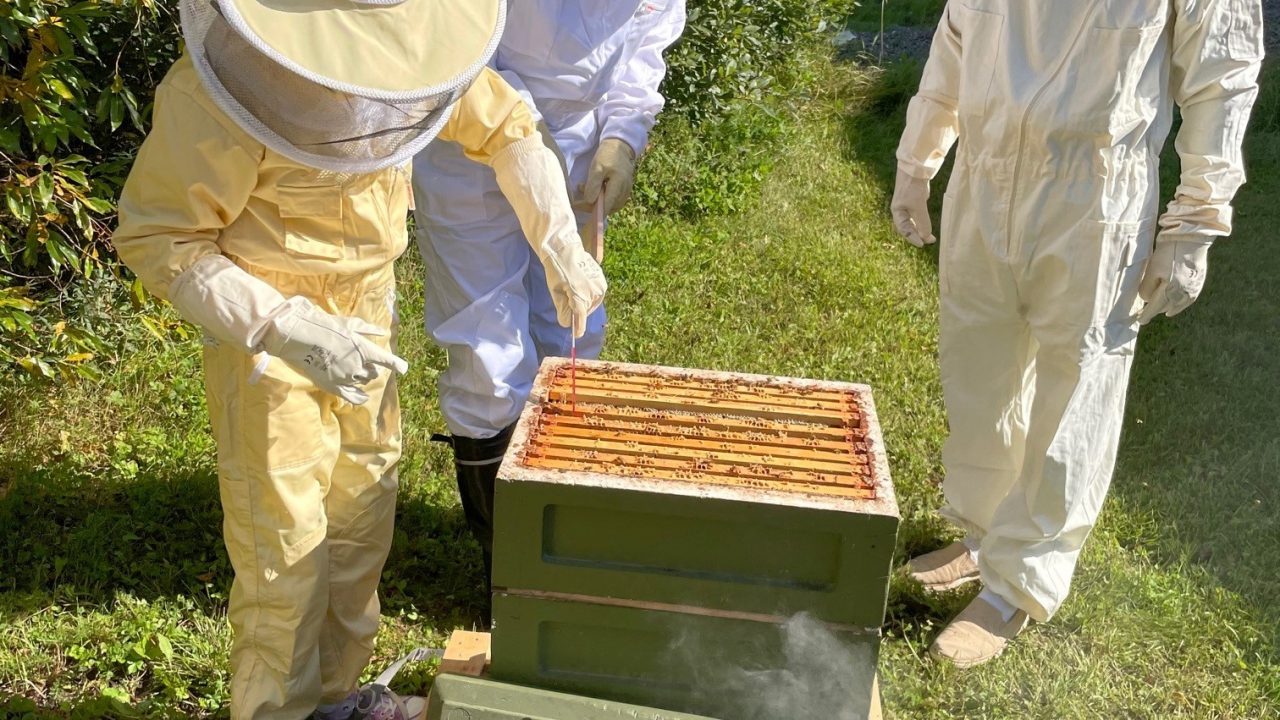 The production of larvae is at its peak in the middle of the summer and it gradually decreases after that. The number of bees is at its highest approx. 8-10 weeks after the intense larvae production has begun, and in an ideal situation, this is also the time for the main harvest season. The harvest season in Finland lasts approx. 3-4 weeks, and towards the end of that it is possible to check whether there is already enough covered honey ready for collection. By mid August, all of the honey is collected and the hives are prepared for autumn feeding. Once the weather begins to get cold again, the worker bees drive the drones out of the hive, and preparations for the next winter begin – one bee year is over.

The duty of the foraging bees is to visit flowers and, consequently, to perform the pollination that is important to plants, as well as to gather nectar, pollen, propolis and water. This foraging stage lasts for 1-2 weeks, during which the bee flies approximately 800 kilometres. Each foraging trip reaches no further than three kilometres from the hive at most, and the bee makes these trips until its wings become worn out and it dies. In the beehive, the bees make honey from the nectar that they have gathered.

Bees use their senses not only to perceive their surroundings but also to communicate with each other. Bees send and receive impulses in order to be able to function as efficiently as possible for the best of the hive. A particular type of impulse may initiate a “programme” that is already in the bee’s genes, which makes the bee begin a task that needs to be performed in the colony.

The pheromones that the queen secretes keep the hive in a state of activity and, when needed, start the growing of a new queen, return a swarm to the hive if the queen is not with that swarm and increase the collection of nectar.

The workers, on the other hand, secrete pheromones to give warnings of danger, to increase each other’s aggressiveness when defending the hive and to mark good nectar sources, water sources that do not have a natural odour identification as well as the flight opening of the hive, the path to a new flight opening and the landing spot for the swarm.

The larvae in the open cells secrete pheromones that increase the workers’ pollen gathering. With the aid of this larvae pheromone, the feeding bees also recognize the gender, the status and the age of the larvae.

DID YOU KNOW: Bees communicate with each other by dancing. So-called scout bees return to the beehive once they have found a nectar-rich location and then they communicate this location with accuracy by dancing. This dance also communicates the time when the nourishment is available, and the bees know how to visit the plant only when it is secreting nectar.

Bees find a flower that has been indicated with the dance with great accuracy: the error in distance is 150 metres at most, and the error in direction is normally less than 15 degrees. Small imprecision is actually practical, since plants normally grow over wider areas and not only in one particular location. The bee’s dance also indicates the time when nourishment will be available and, therefore, the bees know the optimal time for when the flower will be secreting nectar.

DID YOU KNOW: A bee can sense the humidity of the air, based on which it knows, for example, that it should stay in the hive when it is raining. It can also “measure” the moisture level of the honey so that it knows when to cover the cells at the right time.